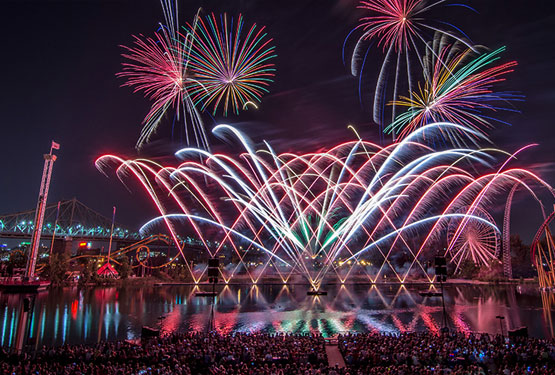 Come out and play! Here is the complete Montreal Fireworks Festival 2017 Schedule:

The Montreal Fireworks Festival is  held at LaRonde and is visible from the Old Port of Montreal. The fun gets under way at 10 p.m. and runs between July 1, 2017 and August 5, 2017.

Vaccalluzzo’s pyrotechnicians recreated the history of Sicily, its art, colours, landscapes, sounds, and architecture. Moreover, this pyromusical journey succeeds at conveying the energy strength, brightness and conviviality that characterize the Sicilian people.

The firm presents a unique and fun creation inspired by the power and energy of pop and rock music. This pyromusical display is an invitation to a great party. The audience won’t resist dancing and singing along.

The firm has created a pyromusical extravaganza sure to capture the imagination of audiences. This fascinating fireworks display depicts a succession of emotional moments, jolly humour and lovely impressions on a soundtrack featuring classical music from Tchaikovsky, Bizet and Pachelbel as well as contemporary creations from Yiruma and Philipp Glass.

The firm invites us to a journey into the music’s “genealogy” tree. Through the history of music, we travel in time from our distant ancestors that discovered rhythm with the noise of tools striking stones and the sound of their own voices to contemporary musical expressions.

Its inspiring fireworks and music display recreates the fantastic odyssey of Portuguese explorers that crossed oceans to discover an unknown world. In our era of globalization, their then “new” relationship with the planet takes a brand new sense.

Jubilee Fireworks’ new display is a toe-tapping pageant of pyrotechnic pleasure. This “pyromusical theatre” show features popular classics from the old and new repertoires, including crowd pleasers such as America from West Side Story, Memory from Cats, On My Own from Les Miserables, and the Overture from The Phantom of the Opera.

A truly magical closing show with inspiring fireworks on the music of Serge Fiori and Harmonium.

Do You Like Pina Coladas? Taste Of The Caribbean On Now!

Lobsterfest In Montreal! Lobster Days Of Summer Are Here!

STAY IN TOUCH WITH US